Lions Clubs are part of community life, in the cities and in the country. Clubs are easily identified by their distinctive Logo, the trademark of our International Association, and the 'We Serve'; motto.

Lions Australia is part of an international association, filled with people who are joined by the common desire to make their communities better, by using their creativity, enthusiasm and energy.

Membership is open to all people of the community in good standing.

This website is where you can find out about your own local Lions Club.

At the meeting they discovered,by combining their efforts and resources as members of a Lions Club they  could more effectively help others in need and make a valuable contribution towards the improvement of our community and the world we live in. The members had attended because they reached stage in their lives that they wished to return something to the community in which they lived.

As a result of the interest and enthusiasm of those who  attended that meeting, the Lions Club of Rostrevor was subsequently formed and meetings were held initially in the now demolished Campbelltown High School Library.

However it was not long before members decided that a more pleasing aspect to those meetings would be if members could meet over a meal and so the Club then held their meetings at the Paradise Hotel. Members met there for many years before moving to the Reservoir Hotel and  the Chinese Garden Restaurant before moving to the Rezz Hotel in 2012.

In the early days following formation,Club members decided that although thee were 20 members names on the books, they would not seek a charter from International until there were 20 active members in the Club. Members believed that this was an essential requirement to enable the club to be to be successful in the long term. Consequently,in spite of some pressure from outside the club, it was not until 29th April 1981 that the Club charter was granted and was then presented on 2nd May 1981 by the then District Governor, Brian Carter.

Upon chartering the Lions Club of Rostrevor became part of the the International Association of Lions Clubs, the largest service organisation in the world now with over 40,000 clubs in m ore than 180 countries and geographical locations. A combined membership of nearly one and half million people all subscribing to the same ideals of lionism,enables Lions Members to help others in need and to improve the quality of life in the world in which we live.

Apart from the rewards and club satisfaction to be gained from from helping others; members of the Rostrevor Club, like all Lions Club members, also enjoy the compainship and support of their fellow Lions. They also enjoy the social interaction with other Lions and their families. not only within their own club but from other clubs elsewhere in Australia and overseas.

The Club has benefited from some incredibly devoted lion members,  none more so than the late Rolf Martin. Rolf is shown here with his James D Richardson Award 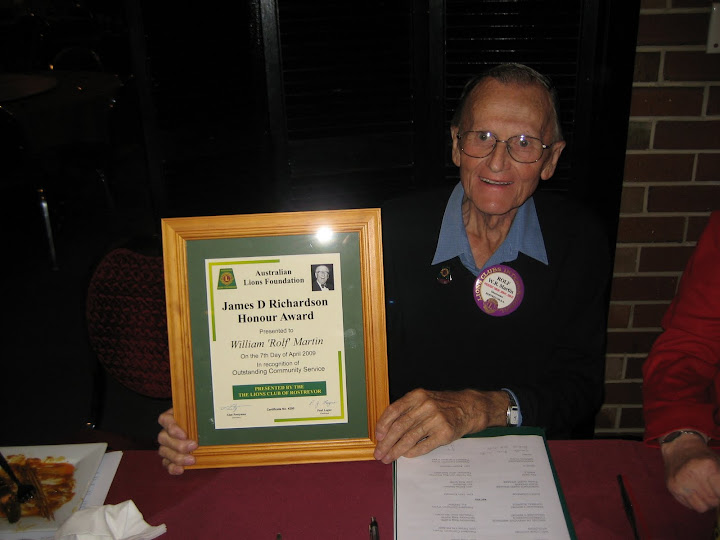